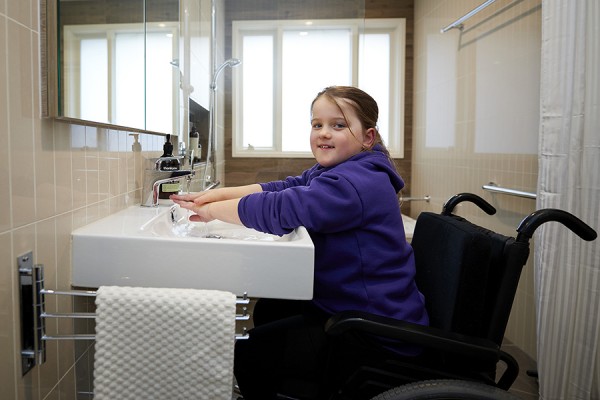 Seven-year-old Hayley’s home modification has helped her to regain her independence and made a positive impact on family life.

The completion of an accessible bathroom has removed daily tensions associated with showering and hair-washing, enabling Hayley to take care of herself in privacy and with safety.

“The difference in life before and after the modifications is like night and day,” says Hayley’s dad, Stu. “The fact that can Hayley can go off and shower herself – she has the ownership and choice – it’s solved a lot of issues and created a much calmer home environment.”

“Seeing our child experience independence in basic daily life, and regain some of the dignity and privacy she needs at her age, is so important for parents,” he says. “The new bathroom also reduced our fears and made our role as carers so much easier.”

Hayley will require some further major surgery due to her condition later this year, which will make her dependent on her parents again, at least for a while.

“This, plus the fact Hayley has lived here her whole life and has very close friends who she has known since kinder, makes it important for us to remain in this house,” says Stu. “But obviously we needed to make some changes.”

When Hayley was little her parents could pick her up to care for her, but as she grew it became harder to transfer her to toilet and bath. A commode was provided as an interim solution, which Hayley hated.

“The toilet door wouldn’t close with the commode inside, and Hayley is a very shy girl at the best of times,” says Stu. “We also had a small cubicle shower which the commode didn’t fit into it. Her mum would have to hop into the shower with her and use a little plastic stool to rotate Hayley around under the water.”

“Last year we resorted to taking her to the hairdresser to have her hair washed once a week because the hair-washing was not worth the fight.”

In late 2016, the family applied for the NDIS and had their Plan approved in early 2017, including a ramp at the front door, bathroom modification, hydrotherapy and physiotherapy.

“It has been a significant contribution from the NDIS, which we are very grateful for,” says Stu. “But when it came to the home modification, we had no idea what to do next. We did a lot of research, spoke to friends and colleagues, and found out about Home Modification Victoria (a service of Architecture & Access).”

The assessment, concept plan and quotes were completed by Home Modification Victoria in March 2017 and the report and recommendations submitted to the NDIS.

“The team at Home Modification Victoria came up with a clever design approach I which would not have thought of,” says Stu. “They rearranged the layout and created a doorway with a sliding door directly through to the adjacent bedroom to enable access for Hayley, located storage outside the bathroom and suggested fittings that created a lot of circulation space in quite a small area.”

“The NDIS approval process took quite a while and we had to follow them up a number times before we eventually got the funding for the home modification,” says Stu.

The modifications were completed in August 2017, taking around six weeks for construction.

“Home Modification Victoria has been very professional and helpful – and their builder was great,” says Stu. “They have provided a bathroom that anyone would be excited to have. It’s solved a lot of problems, and it’s also a nice environment for the whole family.

Stu and Lisa’s tips for parents and families undertaking home modification through an NDIS Plan.

The first step is to get approval to be an NDIS participant. Be prepared to provide a lot of detail and reports about the condition, especially if your child is affected by a rare condition.

In thinking about home modification, be clear about the issues you are facing with your child in accessing the home and rooms within, and in providing care. Also think about the child’s needs as they grow and want to become more independent, if their condition is likely to change, and your ability to continue to provide the current level of care. We were just beginning to experience making the transition from being able lift and carry our child and no longer being able to do that. It’s was a big change with major implications. We also hadn’t realised the emotional dimension of dependence, and just how much the gaining of independence means to a young child. Hayley is so much happier now.

Be ready to do most of the research and groundwork yourself. The NDIS Planners are not necessarily experts in your experience of disability or in knowing what is out there for you.

Ask lots of questions and communicate with the assessor and designer about exactly what you are wanting to achieve and how you want it to look, and listen to their experienced advice.

The NDIS will only fund what they say is reasonable and necessary home modifications. You may not be able to get everything you want funded. Think about paying to upgrade or extend your home modification to include some of the additional things. For example, we decided to pay for a tile upgrade, an additional doorway widening and cavity slider, and underfloor heating in the bathroom. This was discussed and worked out with Home Modification Victoria right from the start. They were very knowledgable about what the NDIS may or may not fund. Our contribution was finalised before the design plans were done.

Be patient, but don’t afraid to follow up and find out where things are up to. We had to be constantly make calls and send emails to the NDIS to progress the approval of our home modification.

Find a good NDIS Support Coordinator in your local area. They can help you to be proactive with following up on the NDIS approval process.

If you do get to the point where you feel the NDIS planning process or home modification approval is not meeting your needs, there are services out there to help you, such as AMIDA Action for More Independence & Dignity in Accommodation

Stay positive, it will be worth it in the end.