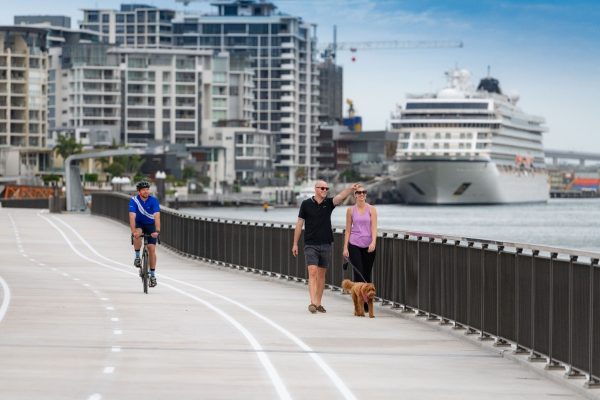 The Kingsford Smith Drive Upgrade is considered to be an important city-shaping project, creating an entry statement to Brisbane and transforming one of the city’s most significant routes into a vibrant urban corridor with the Brisbane River as the centrepiece. Known as “The Gateway to Brisbane”, the $650 million project constructed by Lendlease, will provide increased road capacity to accommodate future traffic volumes through widening the road from four to six lanes between Theodore Street at Eagle Farm and Cooksley Street at Hamilton. It also includes improvement works between Cooksley Street and Breakfast Creek Road at Albion and associated works to adjacent local roads.

The key community benefits of the project include:

Lendlease (LLE) were contracted by Brisbane City Council (BCC) to deliver the Kingsford Smith Drive Upgrade as a Design and Construct (D&C) Project. Lendlease appointed the Jacobs KBR Joint Venture (DJV) as lead designer for the project, supported by a range of specialist subcontractors, including the appointment of Architecture & Access (A&A) as the Equitable Access Consultant and Lat27 for Landscape and Urban Design.

We were engaged in 2016, and as this is an urban project which is one that was not governed by building code legislation, we were tasked with developing a brief specifically to assist with the design and assessment of the Kingsford Smith Drive upgrade works, and known as the Equitable Access Statement (EAS).

The EAS followed the guidance and process of the relevant Australian Standards, Building Codes where applicable and Federal legislation to achieve minimum compliance for people with disabilities from a technical aspect as a baseline. Wherever possible, enhanced outcomes were sought in line with the spirit and intent of the Disability Discrimination Act (DDA). The EAS focused on the provision of a well thought out physical, economic and social environment to enable equality, opportunity, participation and inclusion for all. The EAS informed the direction, consistency and purpose in decision making on the project, and nominated equitable access provisions to be applied to the design of the project which formed the framework to also be used to assess the project. The EAS applied to all areas requiring application of equitable access provisions including, but not limited to, areas accessible to the general public as pedestrians.

The EAS was endorsed by the Department of Communities, Child Safety and Disability Services as part of the project requirements.

Architecture & Access drew of the Brisbane City Council Access and Inclusion Plan 2012 – 2017 and the following relevant reference documents and guiding principles to form an overriding philosophy for access for people with disabilities for the project:

The Brisbane City Council Access and Inclusion Plan 2012-2017 provided the following principles that we incorporated into the EAS.

These principles are as follows:

These principles specifically relate to the project regarding the following areas of the Brisbane City Council Access and Inclusion Plan 2012-2017 and will be the main focus of this document.

Key Access Elements considered in the EAS for this project included:

The Brisbane City Council Access and Inclusion Plan 2012-2017 indicated universal design as a principle to follow in project development.

Universal design comes from a premise that we are not all the same: some of us are elderly, children, some are pregnant or use a walking stick, some are short or tall, some have use of only one arm or are just trying to carry luggage to the airport. All of these factors contribute to how we can function and use a space or product at any one time.

The term universal design was first documented in the US by architect Ronald Mace in 1985 (Vavik & Gheerawo 2009). Mace presented his definition of universal design as a consumer market driven issue, noting that the focus should not be on people with disabilities but on all people, as we all have differing abilities and that none of us are immune from ageing, frailty or disability (Centre for Universal Design 2008). He believed that no environment is ever fully universally designed as we can always make everything more useable (Centre for Universal Design 2008).

As there are no clear prescriptive guidelines to achieving equitable access in the built environment, the universal design process has been chosen as the basis of the philosophy to achieving the design intent, as it closely aligns with the Disability Discrimination Act (1992) (Cth) (DDA) and the Brisbane City Council Access and Inclusion Plan 2012-2017.

The assumption is that by using the seven UD Principles and the DDA, the guiding principles of the council’s commitment to access and inclusion will also be met and hence the expectation/need of all users of the space to promote health, wellness and social participation for a wide range of people. The seven UD Principles are:

Architecture & Access has worked closely with both KSDJV and Lendlease over the last four years to achieve a well thought-out environment to enable equality, opportunity, participation and inclusion for all.