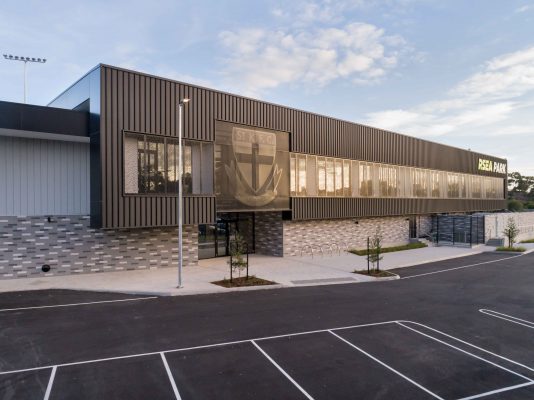 Traditionally known as Moorabbin Oval, RSEA Park as it is now known, has been re-developed to provide a training and administrative base for the St. Kilda Football Club as well as host the AFLW (Australian Football League Womens) home games commencing in January 2020. In addition, grass roots footy clubs will benefit from the new facilities, giving up to 15,000 budding footballers the chance to play alongside their AFL heroes.

In 2015, the Club decided to move its headquarters back to Moorabbin after a seven year stint in Seaford. The $30 million re-development included the demolition of the existing grandstands and the construction of a new building to house the club’s administration as well as various community and league football clubs and facilities for the members of the St. Kilda FC Social Club.

Designed by architectural firm Williams Ross, the two storey re-development includes players’ change rooms and showers, physio and treatment rooms, lounge and medical rooms as well as a high performance gym. Four change rooms with showers are provided for the use of community sporting clubs as well as a basketball court for both public and Club use. The first floor houses the administrative and managerial offices, break-out zones and boardroom.

Architecture & Access were engaged by Williams Ross Architects to ensure that the design of the building, carpark and external paths of travel comply with the requirements of the Australian Standards for disability and access. The principals of Universal Design have been included in the design by providing an environment that is easily negotiated by the use of colour and contrast, wide pathways and clearly designed paths of travel which facilitates accessing the features of the building for people who use mobility aids, wheelchairs and prams.

Architecture & Access are currently involved in Stage 2 of the re-development which includes a 1000 seat grandstand, 25 metre pool and a warm water pool with Adult Change Room facility, making the club an inclusive environment for users of all abilities.