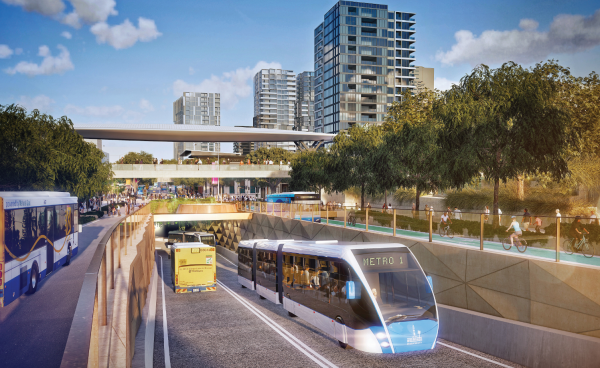 The South East Queensland population is growing and with this requires better public transport infrastructure systems and facilities for all users, local and visiting, including people with a disability. The following projects aim to address this need.

The current rail network is already nearing capacity and is constrained by a single river crossing and just four inner-city stations, causing the bottleneck that limits the ability to run more trains.

By integrating with roads and bus services the project will enable a turn-up-and-go transport system for the whole of South East Queensland.

See link for more information about this project – Crossriverrail.qld.gov.au/about/project-overview.

Brisbane Metro will be a key part of Brisbane’s greater transport network connecting the city to the suburbs.

The $944 million Brisbane Metro project will include a new fleet of up to 60 high-capacity Metro vehicles, each able to carry up to 150 customers. The type of vehicle is not currently operational in the Australian market. The vehicle will include several features that differentiate it from existing vehicles and buses, including an extended length of 25 metres, and the potential for diesel or battery electric drive trains.

The new Metro vehicles will operate on the existing busway along with some other high-frequency bus services, providing customers with more choice and better connections with suburban bus and train services as part of a better planned network.

See link for more information about this project.

This final project will link across the above projects and provide a seamless transition between the different modes of transport.

The Queensland Government’s $371 million new Smart Ticketing system – will make it easier to use public transport by providing more options to plan and pay for your journey.

This project will introduce new ways to pay, including debit and credit cards, smartphones and wearable devices (such as smart watches) and improve your experience through the delivery of a new and intuitive mobile app.

When delivered, it will be the most advanced ticketing system in the world, set to rival the global ticketing networks in Singapore, New York, Chicago and London.

Smart Ticketing will be rolled out across South East Queensland and 18 regional urban centres, by the end of 2022 and see the replacement of over 1,200 fixed devices and 12,000 on-board devices to enable the new ticketing technology.

See link for more information about this project.

The above projects will provide a much-needed change to the Queensland Public Transport System to meet the growing needs of the population. Patricia Flores, Queensland State Manager of Architecture & Access (Australia), in the role of Accessibility and Inclusion Advisor, will assist the above authorities to negotiate the challenges of delivering these projects to realise best practice accessibility outcomes are achieved for all.